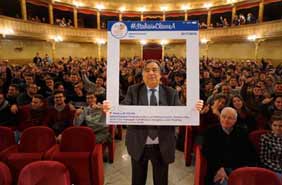 The final step with students of the City of Palermo, involved in a dissemination program about sustainable development, greenhouse gas emissions reductions and energy efficiency, within the project called “R4E Roadmaps for Energy”, it ended at the Biondo Theater in Palermo, in the presence of the Mayor Teacher Leoluca Orlando and the Councilor for the Environment  Eng. Sergio Marino and the ENEA (National Agency for Energy efficiency) professionals during a show- conference, with the comic actor: Diego Parassole.

Considering that, our city has shared the program Italia in Classe A, the first national information and training campaign on energy efficiency, promoted by the Ministry of Economic Development and implemented by ENEA, in implementation of article 13 of Legislative Decree no. 102/2014 which provides, in paragraph c, to: “educate school students of all levels and to a conscious use of energy”.

Legislative Decree 102/2014 implements the Energy Efficiency Directive 2012/27 / EU, envisaging actions to “promote and facilitate the efficient use of energy” with the aim of reducing primary energy consumption by 20 million tons equivalent by 2020.

One of the initiatives in Italy in Class A is “Energy Efficiency on the road,” a tour that unfolded throughout the Peninsula, touching 10 cities, in order to raise awareness of the issues of energy efficiency and Palermo, together with Rome, represents the important venue for the conclusion of the initiative.

The show conference, dedicated to students involved, in an ironic way, by Diego Parassole who made them reflect on current topics such as consumptions, the environment, new technologies and energy efficiency, through moments of great comedy, with a tight rhythm and a language very close to that of the students.

Diego Parassole is a writer and comedian, known for his participation in the television program “Zelig”. He has dedicated many of his theatrical performances to environmental issues. On this occasion, he built, with the scientific support of the ENEA National Agency for Energy Efficiency, a comic monologue full of ideas for reflection, sometimes irreverent.

The organization of the event was managed by the Energy Manager of the Municipality of Palermo, Eng. Antonio Mazzon and the Head of the Environmental Education Laboratory of the City of Palermo Dott.ssa Nunzia La Barbera and the Experts of ENEA Eng. Francesco Cappello and Ilaria Sergi.