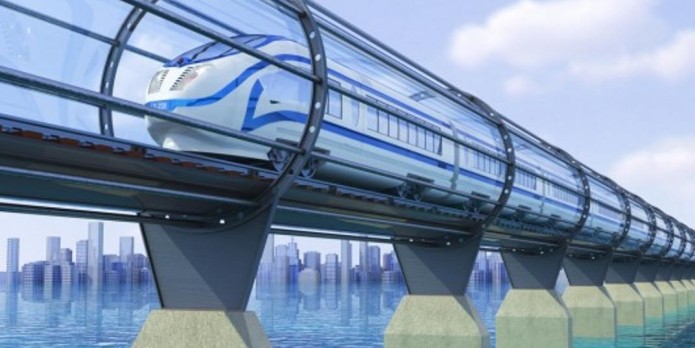 Could Hyperloop be the next step towards Tallinn achieving their R4E objectives?

Hyperloop One is interested in the proposed undersea connection between Helsinki and Tallinn. A pod travelling at airplane speeds would reduce travel time between the two cities to just six minutes, and building it would be cheaper and could be done sooner, the company argues.

Vice president of Hyperloop One, Alan James, was in Estonia last week to introduce the project. According to him, their high-speed pod would be a perfect fit for the proposed connection across the Gulf of Finland. The connection could become the infrastructure project of the 21st century and had the potential to change the economic and political geography of this area, James said.

Hyperloop One could build this connection faster, better, cheaper, and more environmentally friendly, he added. The Estonian transit sector is carefully interested, though they are not convinced that Hyperloop’s schedule is realistic. “If we’re only talking about passenger transport, then this is a very serious alternative to a tunnel between Tallinn and Helsinki,” CEO of AS Tallinna Sadam, Valdo Kalm, said. This mainly because the diameter of Hyperloop’s tube was much smaller than that of a railway tunnel, and because such a tube would likely be much cheaper to build.

“If we’re talking about getting to Helsinki in six minutes, I would extend this in the direction of Stockholm,” Kalm added.

At the same time, there is plenty of skepticism, especially where moving cargo is concerned. “Large goods will never be moved around by Hyperloop, or mass goods, there are so many technical reasons for that, and also financial ones, that won’t happen, so the railway isn’t out of the picture just yet,” transit expert and former chairman of the supervisory board of AS Eesti Raudtee, Raivo Vare commented. According to Jüri Lavrentjev of the Tallinn University of Technology, there are additional problems. Beyond the fact that plenty of technological issues are not yet solved, there is also the aspect of security. If something were to go wrong in a Hyperloop tube, it would be a difficult problem getting to the passengers and rescuing them.

Tesla and SpaceX founder Elon Musk was one of the first supporters the project, which is currently looking for a first route. Hyperloop One has previously presented a first business case for a Stockholm-Helsinki connection that would reduce travel time between the two capitals to just 30 minutes. Other routes have been discussed, in Russia, China, and the United Arab Emirates as well as in other locations in Europe.

So what is a hyperloop?

In Musk’s words, a hyperloop is a system to “build a tube over or under the ground that contains a special environment.” Cars would basically be propelled in this tube. One example could be a huge sort of pneumatic tube where high-speed fans would compress and push the air — although the friction implications make Musk skeptical that it would work. Another option is having a vacuum in the tube and using electromagnetic suspension instead. Musk acknowledges it is hard to maintain a vacuum (one small leak in hundreds of miles of tubing, and the system shuts down), but there are pumping solutions to overcome this. He favors the second solution.

1) The passenger capsules aren’t propelled by air pressure like in vaccuum tubes, but by two electromagnetic motors. It is aimed to travel at a top speed of 760 miles per hour.

2) The tube tracks do have a vaccuum, but not completely free of air. Instead, they have low pressure air inside of them.

3) Air bearings are ski like paddles that levitate the capsules above the surface of the tube to reduce friction. 4) The tube track is designed to be immune to weather and earthquakes. They are also designed to be self-powering and unobsrtuctive. The pillars that rise the tube abobe the ground have a small foot-print that can sway in the case of an earthquake. Each of the tube sections can move around flexibly of the train ships because there isn’t a constant track that capsules rely on.

And solar panels on the top the track supply power to the periodic motors.

With these innovations and completely automated departure system, Elon Musk’s dreams of the hyperloop being the fastest, safest and the most convenient form of travel in the world.